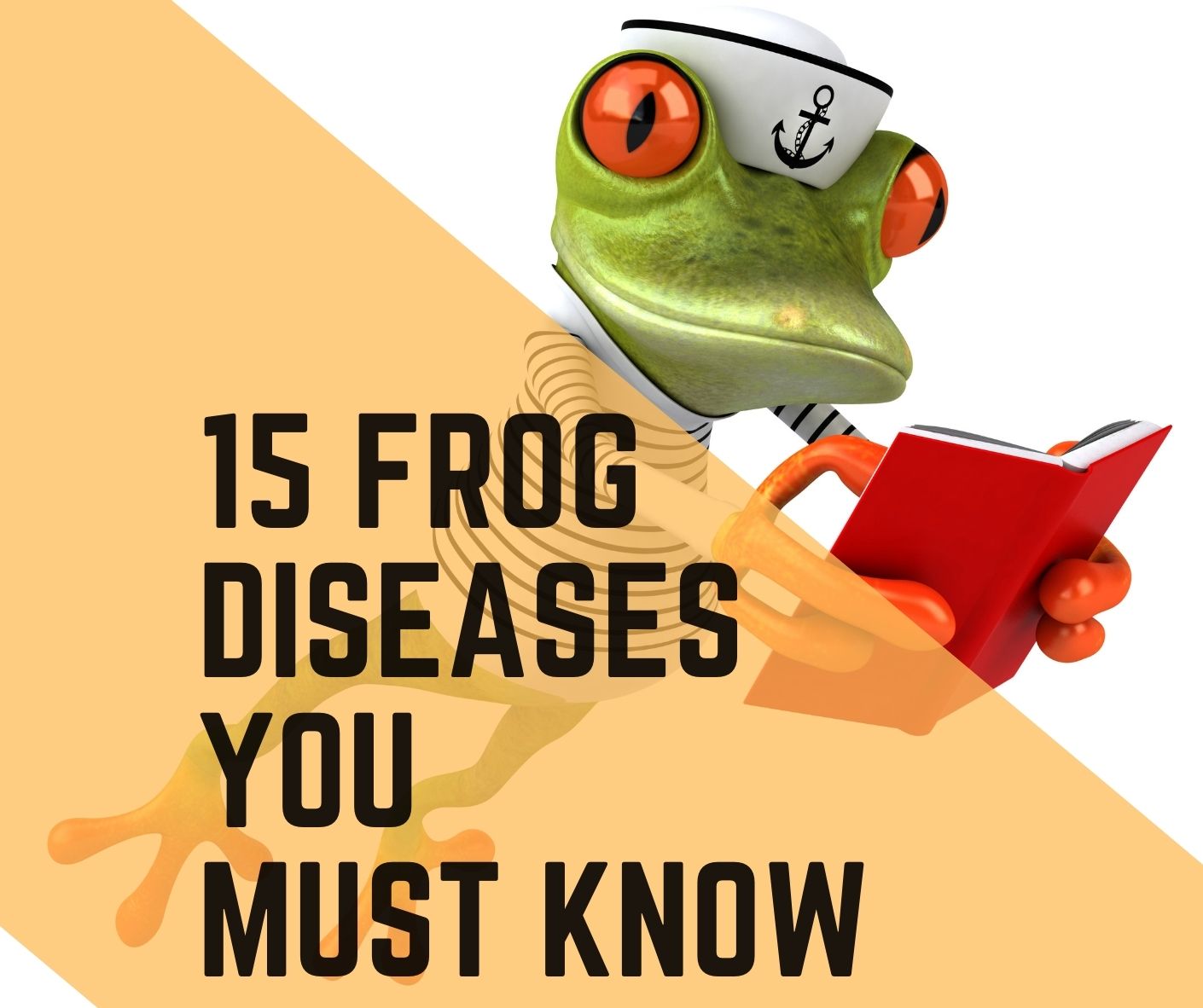 What disease kills frogs? What kind of diseases do frogs carry? can they kill humans? Is it safe to own a frog?

If your mind is boggling with all these unanswered questions, then you have come to the right place, in this post we will discuss various types of diseases frogs carry and which ones kills them.

Unlike any other Amphibian or reptile, frogs also carry bacteria and viruses that can cause abdominal cramps, vomiting, gastroenteritis, typhoid fever, intestinal infection, and other illness in humans.

It generally spreads when a person comes in direct or indirect contact with frogs poop, droppings or feaces.

Besides infecting humans and other species, some pathogens can attack them as well, these infections can either severely hurt or even kill frogs and amphibians in many cases.

Here, we will discuss about 15 lethal frogs Diseases that can kill frogs,toads and other Amphibian species.

Sometimes frogs appear like a balloon but beware they are not filled with air,

it may be a severe case of bloating, Also known as Dropsy, edema, hydropsy, and ascites.

When excessive fluid built inside the frog’s body they became bloated.

The reason behind this severe condition might be a bacterial infection or poor diet and it can happen overnight.

If your frog bloats up then it’s time to take it to the vet.

Is dropsy and bloat the same thing? No, they are different, Bloating is a symptom of dropsy, but dropsy is a collection of symptoms that includes, body lesions, swelling of internal organs, popeye, pinecone of scales, loss of appetite and energy.

“Red-Leg” syndrome is a severe infectious disease found in amphibians such as frogs, toads and salamanders.

As the name suggests, this disease redness on the frog’s legs and abdomen.It also affects the internal organs of the frog.

The infection occurs due to pathogens such as Aeromonas hydrophila.

Although, Gram-Negative organisms such as Pseudomonas, Proteus, and Citrobacter can also lead to similar diseases.

How do you treat red legs?

or the virus transmission takes place due to ingestion of infected animals, exposed to infected water or soil.

This virus most severely attacks the larva and is a seasonal infection.

What is Ranavirus turtle? It is a double strande of DNA virus that causes various infections in cold-blooded animals, including amphibians, reptiles, and fish and turtles

Is there a cure for Ranavirus? currently, there is no definite line of treatment or vaccine for ranavirus. quarantine and sterilization is the only management and precation availbe to prevent it from spreading.

When amphibians (such as frogs, salamanders) or reptiles (e.g. turtles, snakes, and lizards) come in to direct or indirect contact with salmonella infected amphibian or reptile, they also get infected.

Ichthyophoaniasis is a fungus that causes spores on the tissue of amphibians and fish.

Oedema syndrome is a highly infectious disease among amphibian species and is mostly found in frogs under captivity.

Due to this infection frogs bloats and appears like it is blown up with air. This syndrome badly affects the internal organs of frog.

Signs of edema include swelling or puffiness in skin tissue, especially in legs and arms areas. other symptoms include Stretchy or unusual shine in skin color.

It is a congenital abnormality in the spine of the frog; it can be the same as ‘kyphoscoliosis’ in humans.

Chytrid Fungus is Chytridiomycosis is a highly infectious and deadly disease in amphibians.

It has the potential to sharply decline a particular amphibian species and make them extinct too.

It is highly contagious with a mortality rate of 100 percent.There are 2 stages of Chytridiomycosis

In this stage frog behaves normally, is has no visible signs

however, the Litoria Caerulea gets affected by Chytrid Fungus and the frog may get feet hyperemia.

Within 1-2 days frog becomes extremely weak, abduction of limbs and rigidness of frog’s body is visible.

The skin of the frog is not sloughy due to the effect of fungus whereas when the frog falls ill due to other diseases they get sloughing skin.

Frogs have vibrant colors but when are not able to access light for a long time, their skin colour turns dark;

however, when on exposure to indirect sunlight they regain their nice bright colour.

On the contrary, when a frog is sick or hyperaemic despite exposing to the light it will not recover its normal colour.

It might get symptoms such as lethargy, hyperemia, and abducted limbs (these are also symptoms of chytridiomycosis).

The term ‘Hyperaemia’ means ‘increased blood flow’; this is condition is responsible for increased redness on the skin as the blood flow increases the skin gets a reddish tint.

Its is also termed as ‘red leg’; this is also the sign of septicemia or end-stage shock.

Lumps usually forms due to tumors, parasite infection such as tapeworm, sparganosis, and skeletal deformities.

This can also be the case of head injury in the frog, later on, the eye and nose also get ulceration due to nerve damage.

This syndrome is a rare disease that affects the mouth of amphibians and badly influences oral health; major symptoms include weakness of the tongue.

White Discharge is quite common in frogs, this is a natural fluid frogs secrete in the glands under their skin.

This can also be related to human beings, as the stress hormone such as adrenaline releases on stimulation.

How do you treat bacteria infected frogs?

When a frog gets a bacterial infection it can be treated using antibiotics such as amoxicillin, ciprofloxacin, and erythromycin.

Drugs like Enrofloxacin (Baytril) that is available as oral or injectable can help in treating a range of bacterial infections, it can be effective if given 5 mg per kg regularly for a week.

Studies suggests the effectiveness of drug combinations such as metronidazole to target anaerobic and aerobic bacteria.

How do you know if a frog is dying?

The dying frog may or may not show any obvious symptoms such as skin discoloration, bleeding, ulcers etc.

Although the frog might seem lethargic and disorientated and found in or around the edges of the ponds.

Do frogs play dead? Why they do so?

Many animals play dead to trick the predators and save their lives.

The frog can also play dead to escape its predator who watches for movement in its potential prey;

this behavior of the frog is called ‘thanatosis’.

What is Oedema vs edema?

Edema (or Oedema) is bascially a condition of abnormal fluid accumulation under skin tissues. The retention of fluid may be in the legs, arms or in lungs (pulmonary edema).

What is Bullfrog disease?

Bullfrogs are a worldwide traded species, in researches, eaten as food (bullfrog legs), and as fish bait to lure big fishes.
However, releasing or escaping bullfrogs in nature possibly transmit their disease to other amphibians.