When one thinks of salts and water, the ocean probably comes to mind.

however, every natural water source contains a certain amount of salts, which are necessary for healthy aquatic life.

These salts are not our common table salt (Sodium Chloride, NaCl), but are varying ions obtained from minerals and rocks.

Plants and animals in various ecosystems have physiology evolved and adapted as per the salinity level of their habitat.

For Further Reading What amphibians can coexist? Can frogs live together?

What is osmosis? How do amphibians drink water?

Freshwater has the tendency to move from low salt concentrations to higher, through a process called osmosis.

This process is synonymous with the tendency of water to spread out and dilute its surroundings.

How do salt concentrations affect cells?

If you place an animal cell in a solution with a lower salt concentration than inside the cell itself, the cell will gain water by osmosis, and swell up.

Conversely, If we place the same animal cell in a solution of a higher concentration of salts than inside the cell, the cell will start losing water to the outside environment, causing the cells to become flaccid.

What is Osmoregulation? Why we need it?

within a moderate degree, allowing a small margin of differentiation between the salt concentration inside and outside the cell.

The whole concept is rather intuitive, for most people know that the majority of plants and animals found in the ocean will die if placed in freshwater, and vice versa.

It is very important to keep correct salinity levels for aquatic and semi-aquatic animals,

otherwise, the salt balance of external water and internal cell construct is disrupted, resulting in poor health and/or the death of the animal.

This is especially true with amphibians, as they possess semi-permeable skin and are very sensitive to their surrounding environment.

It is also worth noting that salt concentrations affect the pH of a water solution;

another reason why salt concentrations in freshwater environments are important factors when keeping captive animals.

Freshwater vs Saltwater how they differ?

So, if freshwater has salt in it, what is the difference between saltwater, as in the ocean, and freshwater?

Well, terminology, composition, and the amount of salt, really.

Technically, all-natural water sources are saltwater in the sense that they contain salts but differ in possessing varying degrees of salts, and different types of salts.

The term freshwater is typically used to describe water sources with a dissolved salt content of less than 1,000 ppm (parts per million), which equals 100%.

In contrast, highly saline waters usually referred to as saltwater,

The ocean is at a high level, with a 3.50% dissolved salt content.

There are other classifications in between the high and low, namely slightly saline levels

The term freshwater is being termed for nearly every water source except the oceans.

Is salt water bad for frogs?

The terms saltwater and freshwater are a bit ambiguous, as they are sometimes used strictly to differentiate between the ocean and all other forms of water

but are also used to differentiate between the general salinity of a given water body, whether it be seawater or not.

Despite the ambiguity of the term’s freshwater and saltwater,

it is important to know that the oceans are different from all other water bodies on the planet.

The oceans formed some 4.6 billion years ago, are unique in being one of the oldest entities on the planet.

The oceans were formed when atmospheric Oxygen and Hydrogen condensed as primordial Earth began to cool,

and they’ve been here ever since. Freshwater systems, on the other hand, come and go throughout the course of life on Earth

Its formation took place from various events, such as melting glaciers during and just after the ice age (“glacial scour”), volcanic activity, tectonic movements, and seepage from layers of soluble rock.

Do You Know? The oldest lakes on the planet today only date back around 10,000 years or so.

“freshwater” and “saltwater” are layman terms that we use to describe different concentrations of salts in water systems.

So, in terms of composition, there is a significant, geological difference between the oceans and our freshwater systems.

Can Amphibians live in salt water?

Crab-eating frog is the only amphibian that can survive in 2.8% salinity, while tadpoles can withstand salinity up to 3.9%.

The chemical composition of freshwater systems brings us to the focus of this article, creating suitable water sources for captive amphibians.

Now that we know there are ions (salts) present in freshwaters to varying degrees,

the following sections on de-ionized, spring and conditioned waters should make sense.

Distilled, de-ionized, and reverse osmosis water sources at 100% concentration are unsafe for use with amphibians.

As mentioned earlier, amphibians absorb water by means of osmosis, the passage of water from a lower concentration (of salts, in this case) to a higher concentration.

Distilled, de-ionized, and reverse osmosis waters contain a low, or zero concentration of salts and other minerals (hence the name de-ionized).

The cells of an amphibian, on the other hand, contain positive concentrations of salts.

Low salt concentrate water, such as distilled, de-ionized, or reverse osmosis water, passes through the semi-permeable skin of an amphibians

Thus attempts to equalize the concentration of minerals and enzymes on both sides of the cell wall through dilution.

This results in swelling of the cell, and possibly rupture.

In essence, these types of water disrupt the chemical properties and functions of certain amphibian cells and can cause severe health problems and death over a period of time.

We should always keep Amphibians in solutions with similar salt concentrations as found within the animals’ cells.

It is worth mentioning that we can mix distilled or deionized water with normal water to manipulate hard water properties.

Is De-ionized water OK for Amphibians?

One might argue that de-ionized water accumulates ions when exposed to the atmosphere, which is correct, however, this is still unsafe for use with amphibians.

After a few minutes of exposure, a liter of de-ionized water accumulates a small number of ions, resulting in soft water acidic pH 5.6).

Amphibians in the broader group are relatively better in acid toleration.

Many frog and salamander species are successful in surviving acidic solutions of pH ranging in 4-4.5 which most other reptiles and aquatic animals can’t bear.

We should keep Most amphibians around pH 7.0, with a few species preferring pH as low as 6.8 or as high as 7.8.

The accumulation of ions from the atmosphere is not sufficient enough to raise the pH of de-ionized water to a safe level, and thus should not be used alone with aquatic or semi-aquatic amphibians.

Misting and Spraying Amphibians (safe ways to do it)

Misting and Spraying the Terrestrial amphibians with ionized water is helpful, under the pretense water collect ions from the surrounding terrain.

Again, this method is used often, and some would argue the safety of using de-ionized water just for misting purposes, for the fore mentioned reasons.

It is also a fallacy that boiling tap water creates distilled water.

Although the distilling process does include boiling at some point, the entire process is more complex and consists of several additional steps to completely remove all ions from the water.

Boiling water removes some salts and minerals, however, boiling alone does not evaporate all present substances.

Boiling tap water will kill some bacteria, and evaporate some chemicals, but not all of them.

An acceptable method for creating suitable water chemistry for amphibians is to treat regular tap water with a water conditioner/primer.

Somarguees about the safety of this method, as the introduction of any form of chemicals, is unnatural to amphibians.

Note: (conditioners/primers are available in the freshwater fish department of most fish or pet stores).

without stripping off other natural substances (Prime or Amquel are recommended primers) from water.

How do you De-chlorinate tap water for frogs? 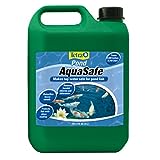 The majority of water sources in the US and other countries are treated with harmful chemicals to kill bacteria but they meet the standard guidelines for human consumption.

you can get more information about tap water quality in your region by contacting your county or city water district.

Keep in mind, that the water sources may not be the same in different cities and counties;

some may have extremely hard water, and some may have very soft water, both of which will affect the pH of the water.

Many rural cities have well water, which may or may not be treated with bacteria-inhibiting chemicals. 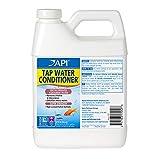 After extracting from underground formations in which water flows naturally to the surface of the Earth.

It is suggested to use Spring-water in conjunction with harder water.

In other words, spring water does not possess the added substances present in tap water,

and still contains the minerals and salts that are removed from de-ionized water.

Is Mineral water is safe for Amphibians?

Because spring water retains its original chemical properties, it will not disrupt most amphibian cells.

One drawback of spring water is that it is typically soft, which means it tends to have a pH on the lower side (acidic).

This can be detrimental to certain aquatic species that require neutral,

Springwater is typically not used by itself, but in some ratio with hard water.

Usually, we treat tap normal water with a water conditioner, to create a neutral (pH of 7.0) solution.

Is Bottled water safe for Amphibians?

RO water or simple filtered water in ratio with conditioned tap water helps in obtaining a healthy level of ions.

How about Pond, River & Lake Water for Amphibians?

Pond water contains a wealth of living organisms, which can provide a source of food for larvae and small amphibians,

in addition to supplemental foods such as daphnia, copepods, scuds, and chopped tubifex worms.

You can also opt to create your own water/salt solutions using distilled water and various salt mixtures.

This eliminates the need for water conditioners and allows keepers to control the pH levels,

Simply by adjusting the softness or hardness of the water accordingly.

below is a list of common salt solutions used with Axolotl’s (Ambystoma mexicanum), which require harder water to maintain healthy skin.

At what pH do salamanders die?

Other amphibians, such as most newts, requires maintaining at closer to pH 7.0 (neutral pH), depending on the species.

PH below 4.2 may induce slower swimming effects and cause mortality in newts and salamanders.

The Solutions in BLACK print with minor dilution, if necessary, to adjust the pH according to any given species.

The solutions in GRAY print are solutions at 100% concentration, and require dilution of 20-50%, depending on species.

Many of these solutions require further modification in the form of dilution for any specific species.